You are here: Home / Social Computing / 12 Lessons from WT:Social 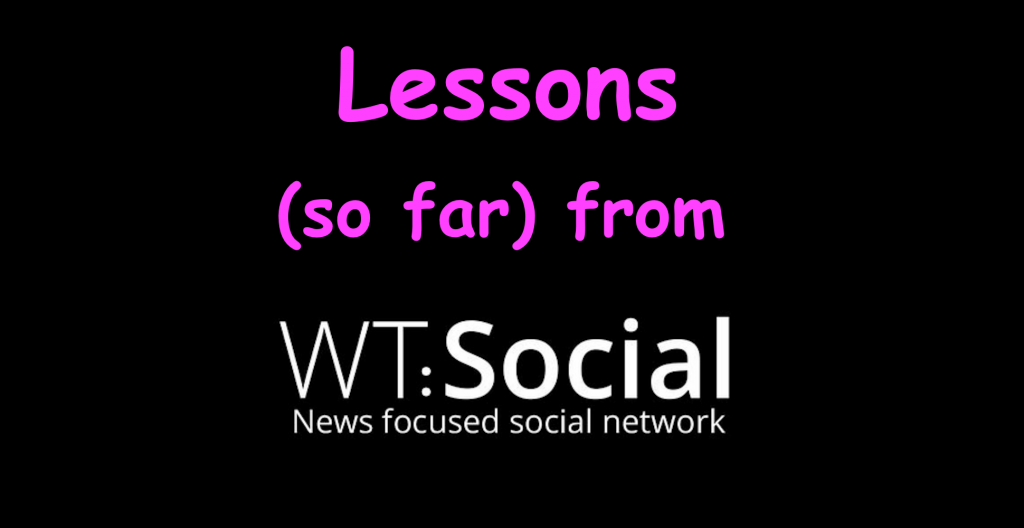 Growth has tapered off significantly on WT:Social, the news focused social network from Jimmy Wales of Wikipedia fame.  Usability remains a huge problem.  There’s a lot of spam and other noise.  It’s still early days, and things may well improve over time, but it’s hard to be optimistic.

So now’s a good time to take a step back and look at what can be learned from the experience so far.  Over the years, I’ve done posts like this with Mastodon, Diaspora, Google+, and other social networks.  This time, I’m working on news focused social network software myself, so some of these lessons are likely to be especially relevant for me.

To start with, here’s a few I discussed in my 2017  Mastodon post (where I noted “we’ve seen them before with Dreamwidth, Diaspora, StatusNet, Gnu Social, Pinboard, Ello, and others”)  that are worth reiterating once again:

Moving on to some new lessons ….

I’m sure there are other good lessons as well – or aspects of these I’ve overlooked.  If you’ve have thoughts, please share them!

Thanks to Deborah, Eve, and everybody else who gave feedback on earlier versions of this post!

[1] As I was working on this post, I stumbled on Amy X Zhang’s thesis, which has some intriguing ideas and prototypes on the tools front.  Starbird et. al.’s paper on  disinformation as collaborative work, is also relevant.  How to apply collaborative approaches to countering disinformation?

[2]  The responses to Jimmy’s recent Why Inviting Friends Is Important highlight this.

[3] Indeed, WT:Social has recently made some progress here, thanks to Linda Blanchard’s excellent work on the Beginner’s Guide subwiki.

[4] Another example: the way new users automatically follow Jimmy Wales.  Jimmy’s said that this is done to make it more convenient for him to broadcast messages for everybody on the site … but there are plenty of other ways to accomplish this.  I get it that Jimmy wants to share the news when Rush’s drummer dies or a Turkish court rules in favor of Wikipedia, but it’s a classic case of assuming that users who haven’t expressed an interest in classic rock or Wikipedia share share his interests.

[5] I talked at length about “neutrality” in WT:Social will have to pick a side.   Jimmy’s comment in the  discussion on WT:Social is illuminating: he thinks people are “yearning” for technology that “fosters the kind of social activity that promotes truth and civil discourse.”  For more on why “civility” is so problematic, see what Ijeoma Oluo, Jamilah Lemieux, Kitanya Harrison, @sassycrass,  and @AngryBlackLady have to say about it.