You are here: Home / Social Computing / Disinformation Week of Action and the #DisruptDisinfo Block Party 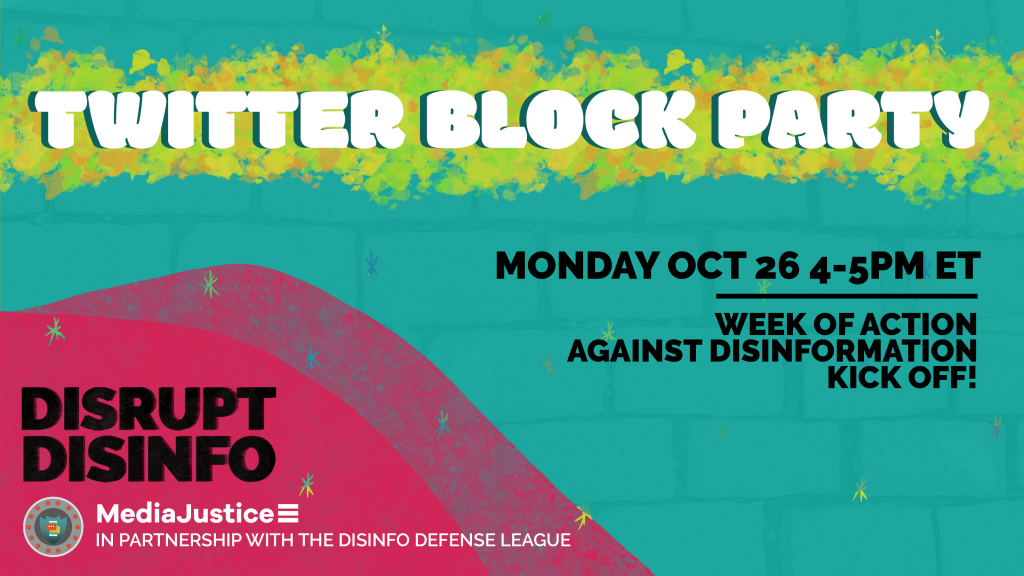 MediaJustice and the Disinfo Defense League are kicking off their Week of Action Against Disinformation with the #DisruptDisinfo Twitter Block Party Monday October 26 at 1 PM Pacific, 4PM Eastern.    It’s a great chance to learn how to respond when people share disinformation — and how to avoid sharing disinformation yourself.

The Disinfo Defense League is a group of non-partisan non-profits and researchers, and they’ve got a lot of other great events planned as part of the week of action.   A few highlights:

And if that’s not enough, Joan Donovan will be starting off each day of the week with a stream on Big if True at 11:00 p.m. Pacific.

If you can’t wait till next week to get started … no worries!   Here’s a couple of videos to tide you over.   First of all, here’s a short video by Shireen Mitchell with tips about cutting down the spread of disinformation.

Everybody’s been targeted by disinformation and other kinds of propaganda from Indivisible Plus Washington on Vimeo.

And here’s Ruha Benjamin, Safiya Noble, Fadi Quaran, and Shireen discussing voter suppression with the Real Facebook Oversight Board — great background to the Canaries in the Coal Mine and Democracy Dilemma events.