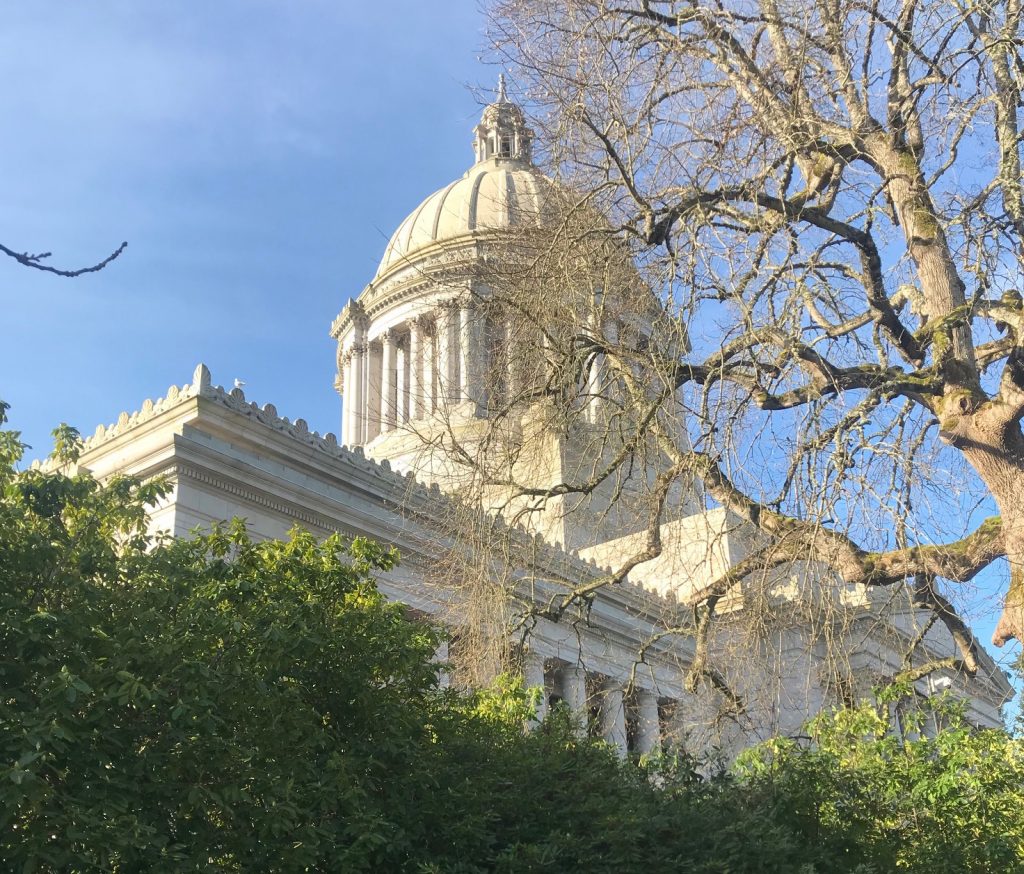 Draft!  Feedback welcome!
Please do not forward!
This may be split into multiple posts before publishing.

As House ITED Committee Chairman Zack Hudgins noted, the tech industry likes these bills — in fact, Microsoft and Amazon like them so much they’re proposing them as a model for other states.   It’s not surprising, really. SB 6280 is sponsored by Sen. Joe Nguyen, who works at Microsoft.  And SB 6281 is not all that different from the bill sponsored last year by Guy Palumbo, now a lobbyist at Amazon.

But from my perspective as a Washingtonian, and a privacy advocate, these are both bad bills.  And it’s not just me!   Friday’s Seattle Times article Flawed data-privacy bill does not protect consumers or hold companies accountable, by Jennifer Lee, Susan Grant of Consumer Federation of America, and Ed Mierzwinksi of WashPIRG goes into detail on the problems with 6281; and there are sections later in the post discussing the broad opposition to both these bills.

Fortunately, there’s still time to make these bills stronger — or to kill them, which is what happened last year.  If you live in Washington, now is a great time to contact your state legislators and ask them to OPPOSE SB6280 an SB6280 as written, and strengthen both bills to give us strong protections.  Here’s more about how to do let your legislators know how you feel.

When companies line up behind a bill that consumer advocacy orgs raise red flags about, is it truly a *consumer* data privacy bill?

Sen. Reuven Carlyle is now the lead sponsor of SB 6281, taking over from his good friend after Guy Palumbo resigned from the Senate to rejoin Amazon as their Director of Public Policy.  A bad day for a bad privacy bill, a good day for privacy discusses the bill’s February 21 committee hearing.  I agree with Sen. Carlyle’s point in his opening session that we’re at an important time, with a dramatic desire for meaningful improvements in consumer privacy legislation.  Alas, the current version of SB 6281 falls far short.

For me, some of the most moving testimony at the hearing was from Stan Shikuma of JACL,who reminded us of the role data abuse played in the the mass incarceration of Japanese Americans and observed “never again is now.” Others opposing the bill included Black Lives Matter – Seattle King County, One America (the largest immigrant and refugee advocacy organization in Washington State), Impact CDA, the ACLU-WA, the Washington State Association for Justice.… and me!   Here’s some of what I said:

This is a really bad bill, especially for people from marginalized communities.  Others today are telling you lots of reasons why. Please listen to them.

But Microsoft, the Washington Tech Industry Alliance, the Association of National Advertisers, and the Network Advertising Initiative all spoke in favor of it.  As Ranking Member Norma Smith commented at a town hall the weekend after the hearing, it was very telling to see the difference between who was supporting the bill and who was opposing it.

Alas, on Friday, Rep. Smith’s strong amendment on data minimization got voted down.  The committee did approve an amendment from Chairman Hudgins with some improvements to a few of its many problems, but it’s still a really bad bill.

Situations like this are very challenging and frustrating for legislators.  They want to do the right thing; and in this case, they know what the right thing is — the bills the House ITED Committee worked on earlier in the session were much stronger then the current sad excuse for “privacy.”  But tech companies have a lot of power, and create a lot of jobs, so it’s risky to go against them.  Legislators want to find a way to make both sides happy by making compromises that work out okay for everybody.

But the compromises in this bill aren’t okay for everybody.  So it’s a challenging situation for privacy advocates and consumer organizations as well. When we say “a lot of people will be harmed as a result of this compromise, especially people form marginalized communities,” there’s a natural tendency for legislators not to hear us.  It’s much more pleasant to listen to the Governmental Relations and Public Policy offices of corporations, who assure legislators that they’ve done a great job of balancing everybody’s interests, and publish stories like the one (from Microsoft) saying this unenforceable bill is “raising the bar” for privacy in the United States.

“Washington is too important a state.  This has to be done slowly and thoughtfully.”

Sen. Nguyen kicked of the February 26 hearing on his bill by talking about how last year he favored a moratorium on facial recognition technology, but now thinks that a different approach is better.   One of the things that really struck me in his statement is when he talked about how he’s reached out to a lot of community organizations about this bill.  I’m sure that’s true; Sen. Nguyen really does seem to understand that the impacts of bad legislation will fall primarily on marginalized communities. But how much he was listening to them, and how much was he listening to the tech industry?

There are a lot of problems with SB 6280 in its current form.  The ACLU-WA and King County Public Defenders have an excellent analysis of how Section 12 undercuts our current constitutional protections.   I also had some sharp criticism from a software engineering perspective in my testimony at the hearing, and added more details about why the “accountability report” and “mitigation plan” need to include approval and enforcement in my follow-on mail.

That said, there’s also a very good idea in SB 6280: a task force, including “eight representatives from advocacy organizations that represent individuals or protected classes of communities historically impacted by surveillance technologies” as well as other stakeholders including law enforcement, retailers, companies that develop and market facial recognition services, consumer advocacy organizations, and universities.    As I said in my testimony

There are very complex and difficult issues here and we in Washington State are very well-placed to come up with good answers.

But we won’t figure the answers out overnight.  Until we do, we need a moratorium.

AI researchers and civil rights lawyers have been calling for a moratorium on the use of facial recognition technology for several years, and momentum is building across the country — and internationally.  Cities including San Francisco, Somerville, Oakland, Berkeley have adopted moratoria; Portland is considering a bill that’s the strongest yet, and Masachusetts is considering statewide legislation. My email to the committee included a (very partial) list of moratorium supporters; here’s a lightly-edited version with some typos fixed.

If Sen. Nguyen happens to read this, a couple of perspectives I’d share from my own Microsoft experience: look at how much time you spend talking to community groups as compared to people from tech companies.  Also, the Government Relations organization is goaled on getting legislation favorable to Microsoft approved here in Washington and across the country. Of course they care about privacy for Washingtonians as well (most of them live there!), but their priorities may not be the same as yours as a legislator, or ours as consumers.

Who does our Legislature work for?

Going back to Sen. Carlyle’s opening testimony, I want to stress again that I very much agree that it’s a great opportunity to seize the moment.  In the “recommendations” section of my mail to the committee, I sketched a potential outcome that would richly deserve the summary “Washington breaks new ground and establishes the gold standard.”

Alas, we’re a long way away from that right now.  The Senate’s versions of 6280/6281 were big wins for the tech and advertising industry.  The House ITED committee has a reputation for being strong on privacy, and didn’t do much to strengthen either bill.

If the bills pass in something close to their current state, it’s very good news for the tech industry.  Washington is justifiably seen as a tech hub, and is known for being very good at consumer protection. And as I said earlier, companies like Microsoft and Amazon are already proposing these bills as a model for other states.

More positively, though, this is also a great opportunity for privacy and consumer advocates to seize the moment.   In this heavily polarizing time, privacy and complaints about big tech companies’ unchecked power are rare issues that cuts across partisan lines.

And Washington’s Presidential Primary (coming up on March 10) offers the opportunity for a wild card.  These sweetheart bills for the tech industry, written by an Amazon lobbyist and Microsoft employee, are perfect opportunities for Elizabeth Warren to highlight her plans to rein in big tech and fight corruption — as well as the Corporate Executive Accountability Act she introduced last year to make it easier to criminally charge company executives when Americans’ personal data is breached.   If she weighs in, it could make a big difference, not just in terms of the legislation, but also the primary. I’ve said for years that politicians won’t take privacy and civil liberties activists seriously until these issues make the difference in some high-profile elections … now would be a great time to start 🙂

Of course, as wonderful as that would be, we can’t count on it.  When Savannah Sly of the ACLU and I spoke at the Seattle Indivisible Resist Trump Tuesday rally last week, I talked about how grassroots activism can really make a difference at times like these; so please please please, contact your legislators — and ask your friends and family to as well.

At the end of the day, though, it’s up to our legislators.  Do they work for Microsoft, Amazon, and the rest of the tech industry?  Or do they work for us? And if so, what are they doing to protect our rights?