For years, I’ve asked software engineers and designers I run into at conference if they know about gender HCI (human-computer interaction), feminist HCI, or post-colonial computing. More recently, I’ve added intersectional HCI, anti-oppressive design, and design justice to the list as well. The response is usually something along the lines of “sounds interesting, but never heard of it.”

Which is a shame. These fields have some great insights about how to create software that works better for everybody. A very brief overview:

At some level it’s not surprising that this work isn’t as well known as it should be. Much of this work has been done by women of color, queer and trans people, and others who are marginalized within the tech world. Much of this is heavily influenced by the social sciences, which are also marginalized by tech. And much of this work is also by the kinds of biases against that anti-oppressive research that Alex Ahmed, Judeth Oden Choi, Teresa Almeida, Kelly Ireland, and I discuss in What’s at Issue: Sex, Stigma, and Politics in ACM Publishing.**

So here are some slightly longer overviews of these different areas, each featuring a handful of key papers, along with a few videos. As you read this, Like any literature survey, what’s here is filtered through my background and interests; if there’s other work that you think should be here, please let me know!

Dr. Margaret Burnett’s Open Lecture from the IT University of Copenhagen.

The GenderMag Method, a gender-specialized cognitive walk-through process and a set of four personas, is based on 15+ years of excellent research by Margeret Burnett and a wide range of collaborators (starting with ). GenderMag: A method for evaluating software’s gender inclusiveness describes five facets of gender-linked differences: motivation, information processing styles, computer self-efficacy, risk aversion, tinkering). “The users who tend to be best supported by problem-solving software tend to be those best represented in software development teams (e.g. relatively young, able-bodied, males), with other users’ perspectives often over-looked.” There’s also a community wiki with teaching resources, and an open source Recorder’s Assistant to help “semi-automate” the process.

Gayna Williams’ “Are you sure your software is gender-neutral?” is a good more general overview, looking at some of the reasons for gender bias in software, with suggestions for free and low-cost ways of improving the situation.

Samantha Breslin and Bimlesh Wadhwa’s Exploring Nuanced Gender Perspectives within the HCI Community, from 2014, discusses “how recent approaches to gender in HCI move past questions of how men and women interact differently with technologies. Scholars are focusing on activist, intersectional, and reflexive approaches to gender and identity in design that focus on inclusion and accountability in terms of who technologies are designed for and in what ways.” The same authors’ Towards a Gender HCI Curriculum outlines “the core topics, learning outcomes, and possible activities and assessments a Gender HCI module should cover;” and their Gender and Human‐Computer Interaction (in the Wiley Handbook of Human-Computer Interaction) outlines various strategies and approaches to gender HCI including “understanding gender, feminist theories, and queer theories; analyzing gender scripts and metaphors embedded in technologies; reflexivity regarding developers’ and designers’ norms and values; feminist design and an intersectional approach; and designing for future diversity.”

The most visible academic work on Gender HCI has used a simple binary gender model. Gopinaath Kannabiran’s Where are all the queers? looks at some of the implications of this. Kannabiran’s Themself: Critical Analysis of Gender in Facebook critically analyzes the interactions of non-binary gendered subjectivities, “uncovering some of the system level design choices that render non-binary gendered users invisible for all intents and purposes,” and recommends approaches based on democratizing design and pluralism.

Foad Hamidi, Morgan Klaus Scheuerman, and Stacy M. Branham’s Gender Recognition or Gender Reductionism? finds that transgender individuals “have overwhelmingly negative attitudes towards AGR [automated gender-recognition] and fundamentally question whether it can accurately recognize such a subjective aspect of their identity,” and includes recommendations on how to accommodate gender diversity when designing new digital systems. Os Keyes The Misgendering Machines: Trans/HCI Implications of Automatic Gender Recognition shows that “AGR consistently operationalises gender in a trans-exclusive way, and consequently carries disproportionate risk for trans people subject to it,” and includes ideas for alternatives to AGR and how HCI can work towards a more effective and trans-inclusive treatment of gender.

HCI Inclusive Gender Guidelines, with contributions from many of the authors listed here, provides helpful tools for writers, researches, and conference organizers, and has a very useful “terminology” section.

Susan Herring et. al.’s Searching for Safety Online: Managing “Trolling” in a Feminist Forum, in The information society (2002), looks at a major category of HCI weaknesses that still have not been addressed. Dealing with hate speech, flaming, and trolls, on the Computers, Freedom, and Privacy wiki, proivdes a snapshot as of 2008. Frances Shaw’s Still ‘Searching for Safety Online’: collective strategies and discursive resistance to trolling and harassment in a feminist network, in The Fibreculture Journal, from 2013, looks at similar dynamics in a network of blogs. Shireen Mitchell’s Hacking of 2016 would have never happened had folk #ListenedToBW Twitter Moment looks at lessons from 2014 from an intersectional perspective, and Amnesty International’s Toxic Twitter — A Toxic Place for Women highlights the current rather depressing state.

Shaowen Bardzell’s Feminist HCI: taking stock and outlining an agenda for design (2010) defines Feminist HCI in terms of interactive systems “that are imbued with sensitivity to the central commitments of feminism — agency, fulfillment, identity and the self, equity, empowerment, diversity, and social justice” and “entails critical perspectives that could help reveal unspoken values within HCI’s dominant research and design paradigms and underpin the development of new approaches, methods and design variations”.

Jennifer A. Rode’s A theoretical agenda for feminist HCI (2011) discusses the limitations of the three dominant paradigms for treating gender in HCI (including the Beckwith et. al. gender HCI work discussed above), argues for “a need to focus on gender issues in real-world settings rather than in laboratory settings” and “the examination of gender as a social product,” and calls for the field “to engage with existing feminist theory to create our own feminist socio-technical theory.”

Irani, Lilly, Janet Vertesi, Paul Dourish, Kavita Philip, and Rebecca E. Grinter. “Postcolonial computing: a lens on design and development.” Proceedings of the SIGCHI conference on human factors in computing systems. ACM, 2010.  “Postcolonial computing is … an alternative sensibility to the process of design and analysis. It asserts a series of questions and concerns inspired by the conditions of postcoloniality but relevant to any design project.  The authors suggest four shifts in approach: generative models of culture, development as a historical program, uneven economic relations, and cultural epistemologies.

Ahmed, Syed Ishtiaque, Nusrat Jahan Mim, and Steven J. Jackson. “Residual mobilities: infrastructural displacement and post-colonial computing in Bangladesh.” In Proceedings of the 33rd Annual ACM Conference on Human Factors in Computing Systems, pp. 437-446. ACM, 2015. Based on a field study among populations displaced by a development project in Dhaka, Bangladesh, the authors argue that “different and heretofore residual experiences of mobility must also be accounted for in post-colonial and other marginal computing environments” and document “four forms of infrastructural experience — dispossession, reconstitution, collaboration, and repair — that characterize real-world engagements with infrastructure in such settings”

Mukurtu is a grassroots project aiming to empower communities to manage, share, narrate, and exchange their digital heritage in culturally relevant and ethically-minded ways. “In 2007, Warumungu community members collaborated with Kim Christen and Craig Dietrich to produce the Mukurtu Wumpurrarni-kari Archive. Mukurtu is a Warumungu word meaning ‘dilly bag’ or a safe keeping place for sacred materials. Warumungu elder, Michael Jampin Jones chose Mukurtu as the name for the community archive to remind users that the archive, too, is a safe keeping place where Warumungu people can share stories, knowledge, and cultural materials properly using their own protocols.”

Ari Schlesinger, W. Keith Edwards, and Rebecca E. Grinter’s Intersectional HCI: Engaging Identity through Gender, Race, and Class includes a meta-review of identity representation in the CHI proceedings and finds that “previous identity-focused research tends to analyze one facet of identity at a time. Further, research on ethnicity and race lags behind research on gender and socio-economic class.” The authors recommend for “incorporating intersectionality in HCI research broadly, encouraging clear reporting of context and demographic information, inclusion of author disclosures, and deeper engagement with identity complexities.”

Miriam E. Sweeney’s chapter on “The Intersectional Interface” (in The Intersectional Internet, edited by Safiya Umoja Noble and Brendesha M. Tynes) looks at how gender and race shape the design of anthropomorphized virtual agents (AVAs) and “illuminates the ethical considerations that designers of technology must engage with if they are to engage socially responsible technologies.” Sweeney’s “The Ms. Dewey “experience:” Technoculture, gender, and race”, in Digital Sociologies, and thesis Not Just a (Pretty) Interface go into more detail on AVAs. Noble’s A Future for Intersectional Black Feminist Technology Studies sets this work in a broader context.

Diversity-friendly software at SXSW, a 2017 presentation by Shireen Mitchell and myself, looks at intersectional internet and HCI issues along with other software engineering techniques. 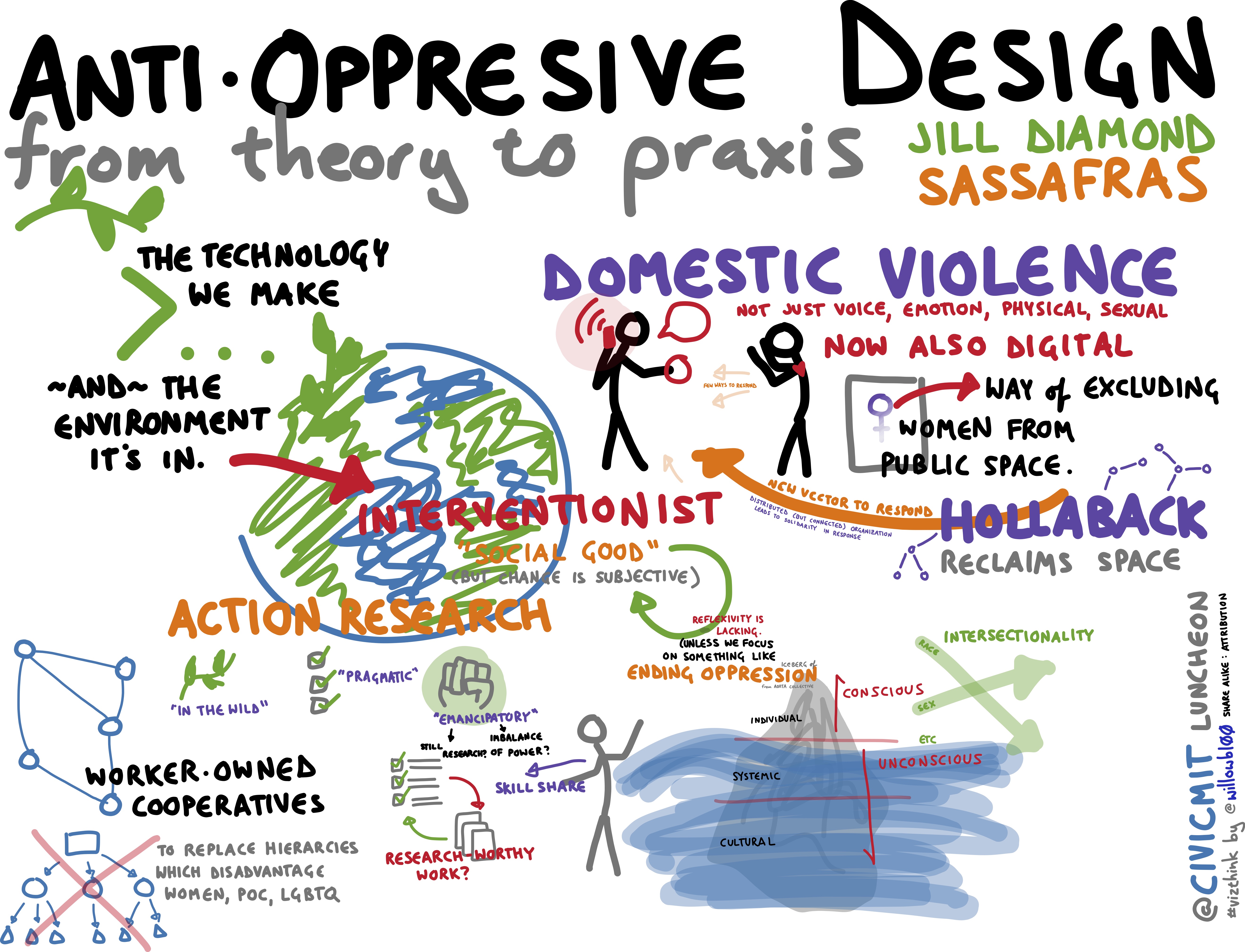 Jill Dimond’s Anti-Oppressive Design: From Theory to Praxis talk at MIT (which builds off the ACM interactions paper by her and Thomas Smyth) sites these approaches “in a liminal space between interpretivism and radical humanist and radical structuralist paradigms,” discusses her work on gendered violence with Hollaback, her approach to action research, and suggests worker-owned cooperatives as an approach to addressing oppression in the workplace.

The Design Justice Principles (developed by an emerging network of designers and community organizers rethink design processes) centers people who are normally marginalized by design, and uses collaborative, creative practices to address the deepest challenges our communities face. Sasha Costanza-Chock’s Design Justice: Towards an Intersectional Feminist Framework for Design Theory and Practice builds upon the Principles to propose a working definition of design justice; their Design Justice, A.I., and Escape from the Matrix of Domination is an outstanding introduction.

Torn Apart / Separados visualizes the geo-spatial, financial, and infrastructural dimensions of immigrant detention in the US in the wake of the Trump Administration’s “zero tolerance” policy. The map above is just one of their visualizations of the locations of ICE facilities and private detention centers, based on aggregating and cross-referencing publicly available data. Textures has context from the project team; Emily Dreyfuss’ Wired article ICE Is Everywhere: Using Library Science to Map the Child Separation Crisis is an outstanding overview of the project’s beginning; and Lindsay McKenzie’s Digital humanities for social good, on Inside Higher Ed, has some excellent context for how Torn Apart / Separados and other digital humanities projects are challenging perceptions of the field.

* Thanks to Os Keyes for the excellent suggestions!

** Alex Ahmed and I first met because she saw an earlier version of this page. How meta is that?